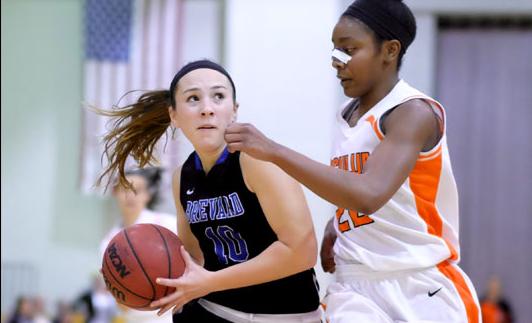 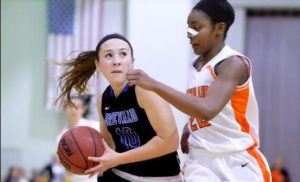 Senior guard Kelsie Rhyne scored a game-high 15 points and climbed the glass for eight rebounds to help lead the Brevard women’s basketball team to a 61-41 victory over Wesleyan College on Friday evening.

Rhyne, who knocked down 6-of-10 field goals and 3-of-4 free throws, topped double figures for the second time in as many contests. She was joined in double-figure scoring by Destiny Williams (12) and Annalee Bollinger (11), as the Tornados moved to 2-3 on the season.

Williams, who reached double figures for the first time since the season opener, finished 5-of-9 from the floor. She was also active on the glass, hauling in nine rebounds, and forced three steals. Bollinger made her presence felt at the free throw line, finishing off a 6-for-6 outing, to go along with six assists and two blocks.

Brevard overcame its third-quarter shooting woes with a 22-point fourth that included nine points from Williams and five from Bollinger. The sharp-shooting Bollinger opened the quarter with a 3-pointer and Williams singlehandedly scored the next seven points to make for a 49-31 lead.

A free throw by the Wolves’ TK Blount was not enough to derail Brevard, which used two free throws by Bollinger and a 3-pointer from Taryn Ledford to take the 54-32 lead. The Tornados maintained at least a 20-point advantage down the stretch as a 3-pointer from Jade Napier, coupled with buckets by Williams and Rhyne made for the 61-41 final.

Wesleyan turned up its defensive pressure in the third quarter, trimming the Tornado advantage to eight by outscoring Brevard 14-7. Six Wolves scored at least one point, including Rosine Nguenowou who finished with four.

The rally began with Wesleyan scoring five unanswered points, but a jumper by Napier kept the lead in double figures. Rhyne followed, pushing the lead to 13, 35-22, but Wesleyan managed to score nine of the final 12 points to make for a 39-31 score through three.

Rhyne made her presence felt in the opening stages of the second quarter, scoring four of six points for the Tornados who moved in front 22-10 with 6:57 left. A trey by Shakirah Thompson stretched the lead to 14 just over a minute later, which eventually ballooned to 30-14 after a layup by Rhyne. The two teams traded buckets over the final two minutes of the half as Brevard took a 32-17 lead into the intermission.

Four points each by Rhyne and Bollinger allowed Brevard to take a 16-10 lead at the close of the first quarter. Rhyne, who finished 2-for-3 in the frame, scored the first bucket of the game as the two teams eventually reached a four-all deadlock. Rhyne added to her total at the 4:11 mark, converting a layup, which was followed by 3-pointers by Williams and Riddick as Brevard scored 10 unanswered points.

The Tornados complete their two-game weekend series of games tomorrow afternoon at 2 p.m. when they face Covenant.