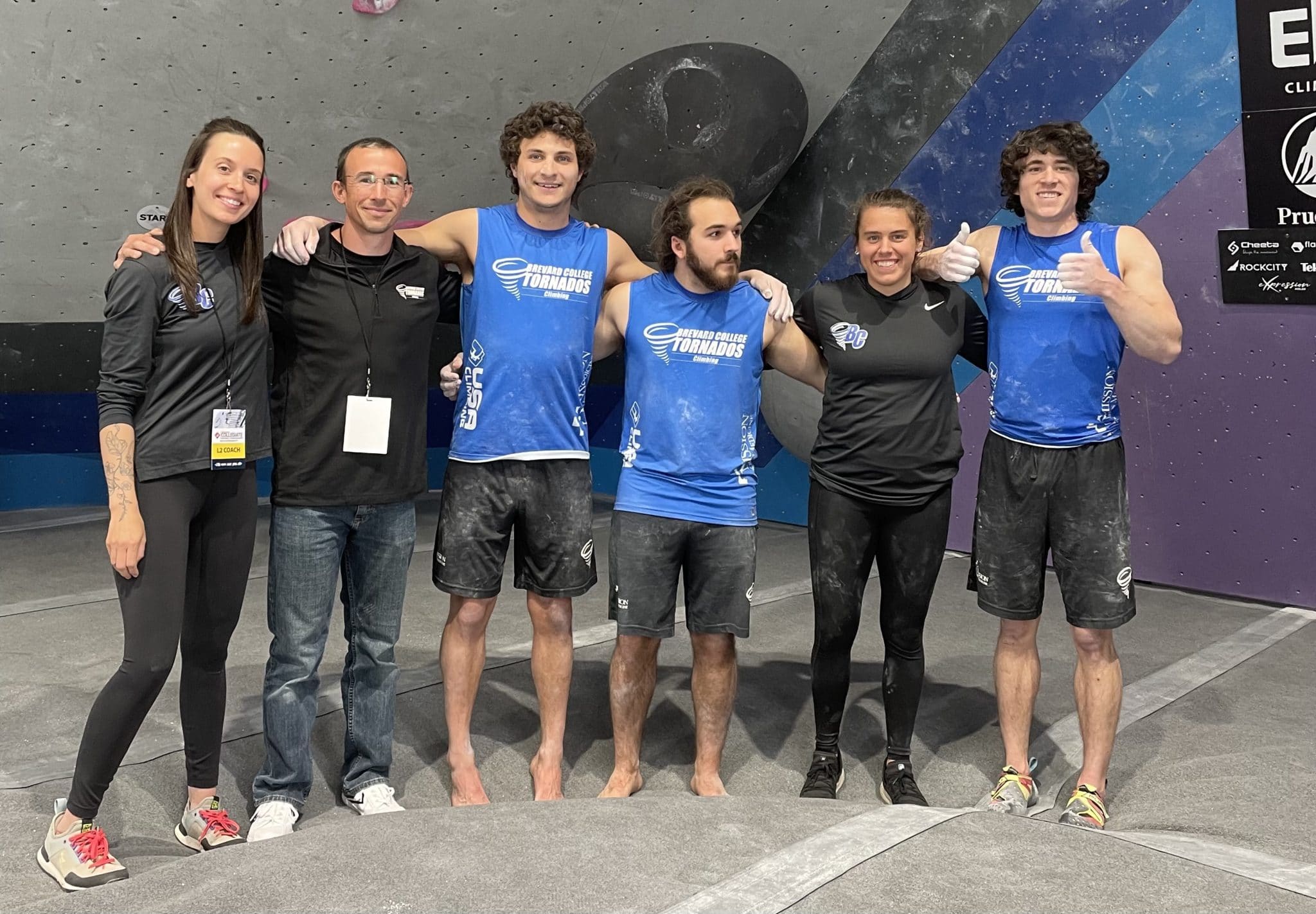 The Brevard College Climbing team completed a highly successful 2021 season with a showing at the USA Climbing Collegiate National Championships on Thursday at Reach Climbing & Fitness in Bridgeport, Pennsylvania.  Four Brevard College student-athletes competed in the Bouldering category against a highly competitive field at the national championships.  BC senior Madison Altman represented the Tornados on the women’s side, while juniors Caleb Trent, Kendrick Austin and Dawson Jacobs all competed in the men’s competition.

On Thursday, the Qualifying Round took place with the top 20 overall climbers in both the men’s and women’s fields advancing to the Bouldering semifinals and finals to be held this weekend at Reach Climbing & Fitness.  Trent, came extremely close to qualifying for the semifinals, just missing by a single move while fighting until the final buzzer.  In the end, Trent finished in a tie for 33rd place in the men’s competition.

Austin, placed 68th in the qualifying round.  Jacobs, finished 69th.

Altman, battled in the women’s competition to a 68th-place finish in the national competition.

Altman placed seventh in the Bouldering competition at the Divisionals to ensure her place at the national championships.  Also at the Divisional Championships, BC junior Shyvonne Potter (Stokesdale, N.C.) placed 15th in the finals, while freshman Shannon McCarthy (Parks Hill, Ky.) placed 24th in qualifying.

In advance of the Divisionals, Brevard College competed in two qualifying collegiate events.  Between the two events, the Tornados racked up two event wins, eight top-five finishes and 11 top-ten’s.

In December, the Brevard College climbing team earned a 1-2-3 sweep in men’s competition and took 2nd and 3rd place in the women’s results at the BigFoot Climbing Competition in Morganton, North Carolina.

Austin won the competition to lead the 1-2-3 sweep for the Tornados in the men’s with Board placing second and Trent taking third place.  Altman finished second in the women’s competition with Potter placing third.

In February at the Wake Forest Competition, BC posted impressive results, including an event win by Jacobs.  With a strong field of 32 men’s climbers, Jacobs won the competition to lead the Tornados to a total of four men’s top-ten finishes.  Trent finished third, followed by a sixth-place result for Board and a seventh-place finish for Austin.  Altman led Brevard in the women’s competition with a fourth-place result in a field of 18 climbers.  Potter placed seventh to give BC another top-ten result, while McCarthy finished 16th.

This Spring’s championship competitions marked the first USA Climbing National and Divisional Championships for the collegiate level since 2019 due cancellations as a result of the pandemic.