Student Serves as an Inspiration to MLB All-Star 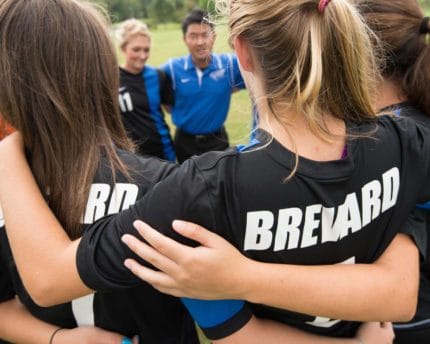 Grilli, who is a pitcher for the Pittsburgh Pirates, invited McMahon to be his guest at the 2013 MLB All-Star Game. While there, the Brevard College senior took in the Home Run Derby and Tuesday’s Midsummer Classic from the stands at Citi Field.

“I felt so honored to be a part of that, it was an amazing experience,” said McMahon. “Jason’s an amazing person, and this week I felt like a part of his family.”

McMahon, who lost her left leg in a tragic accident during her senior year of high school, met Grilli in 2010 as they both rehabbed injuries with the same physical therapist. They’ve been close friends ever since.

“I was with him five days a week and we just bonded over getting through our injuries, and we really pushed each other,” McMahon said.

During an in-game interview with Fox TV sportscasters Joe Buck and Tim McCarver, Grilli talked about how much McMahon had inspired him during his rehab.

“Seeing what she was going through in physical therapy every day made me realize I could get through mine,” Grilli said in reference to recovering from a tear in his quadriceps muscle.

On McMahon’s play for the Tornados women’s soccer team, Grilli gets emotional just talking about her accomplishments.  “It’s awesome to see. I get videos and I cry every time she sends them to me because I’m just so proud…”

The two remain close despite their busy schedules.

“We try and keep in touch, whenever I get a chance to go to a game I’ll go,” McMahon added. “I follow the Pirates and I’m always looking to see how he’s doing.”