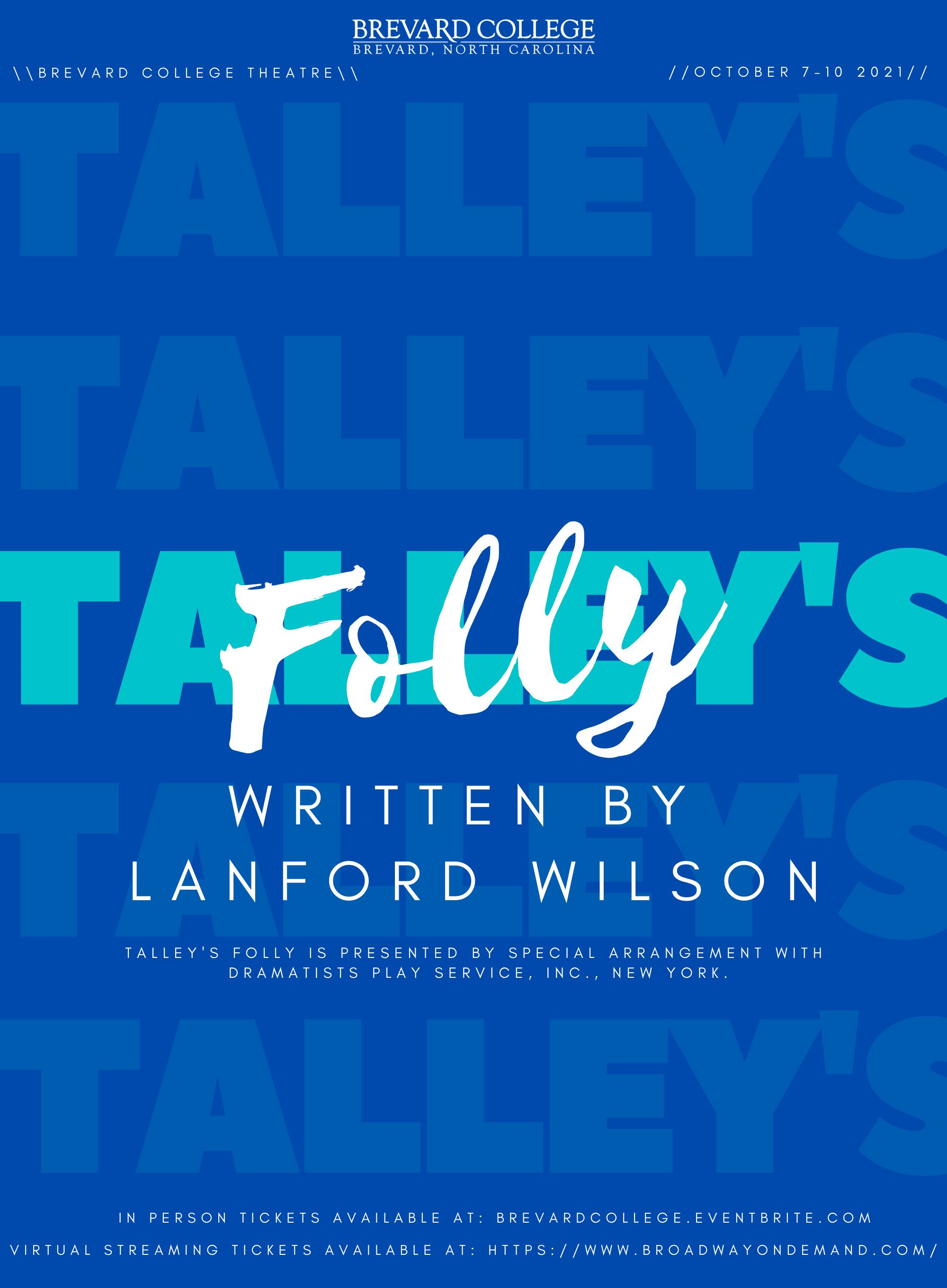 Brevard College Theatre presents Talley’s Folly on October 7, 8, and 9 at 7:00pm EST, and October 10 at 2:30pm EST. The cast is Taylor Sparrow, a Sophomore BA Theatre major from Greenville, NC, and Emma Harris, a Senior BA Theatre major from Charlotte, NC. The production will be held at the Morrison Playhouse in the Paul Porter Center for the Performing Arts.

“Talley’s Folly, written by Lanford Wilson, is the winner of both the 1980 Pulitzer Prize and the New York Drama Critics’ Circle Award as best play of the season. This timeless story deals with the courtship of the young Sally Talley and her Jewish suitor, Matt Friedman. Bookish, erudite, totally honest, and delightfully funny, Matt refuses to accept Sally’s rebuffs and her fears that her family would never approve of their marriage. Charming and indomitable, he gradually overcomes her defenses, telling his innermost secrets to his loved one and, in return, learning hers as well. Gradually he awakens Sally to the possibilities of a life together until, in the final, touching moments of the play, it is clear that they are two kindred spirits who have truly found each other—two ‘lame ducks’ who, in their union, will find a wholeness rare in human relationships.” (Dramatists Play Service)

“Praised by the New York Times and New York Post, Talley’s Folly has been called “perhaps the simplest, the most lyrical play Wilson has written—a funny, sweet, touching and marvelously written and contrived love poem for an apple and an orange.” (NY Post)

Director, Joe Hernandez says the heart behind the action in Talley’s Folly is about the need to discover the truth. “I have always felt that both Matt and Sally are wanting to discover the truth that lies within their own stories. What we find through the journey of the play, is that in the end they both are able to accept the love they never felt they deserved.”

Tickets can be purchased online at brevardcollege.eventbrite.com or at the door, if available. Ticket prices are $5 for students and $10 for the general public. To attend a Brevard College Theatre performance in person, you must agree to follow COVID safety protocols of presenting identification and proof of vaccination at the Box Office. You must also wear a mask at all times inside the Paul Porter Center for the Performing Arts. There will be a streaming option available for purchase for this production through broadwayondemand.com.

All Brevard College Theatre faculty and mainstage production cast and crew are fully vaccinated.  Additionally, all unmasked performers have tested negative for COVID before each performance.