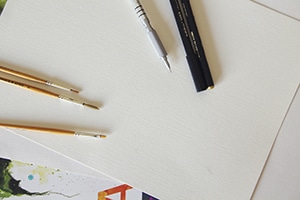 by Alli Marshall from Mountain Xpress
PRESS RELEASE FROM THE ARTIST:

This month, Brevard resident Gregory Dickens releases eMMA, the latest series in his Heroes of Sinclair line of comics from the Robot Wonderboy studio. It debuts officially June 17 at Charlotte’s HeroesCon, one of the east coast’s most celebrated pop-culture conventions, now in its 34th year.

eMMA is the story of a female, robot cage fighter who treats each supervillain fight as a defense of the SCRAP fight league championship. The city of Crampton is dominated by the giant lava monster, Volcano Jack, and the horde of opportunistic supervillains who have staked their territory in his orbit. Three young civilians – Jared, Ashley, and Harris – reactivate eMMA after SCRAP’s demise and give her a new purpose. But none agree on exactly what makes a hero: Is it someone who fights or someone who inspires others to fight for themselves? And which does eMMA want to be?

“eMMA was intended to be something of a sidekick when I started,” Dickens said. “But she provides another opportunity to approach superheroes from the perspective of someone who isn’t driven by vengeance. She wants to help. The trick is finding out the best way to do that.

“There are plenty of angry heroes out there. And they make for good comics. Sometimes, great comics. But the industry has a new wave of ‘happy heroes’, and eMMA fits alongside Marvel’s Squirrel Girl and Ms. Marvel and DC’s Batgirl.”

Begun in 2010, the Heroes of Sinclair series of comics features superheroes who operate as privately employed first-responders, working in shifts and regular patrols and eschewing secret identities. The burgeoning city of Sinclair is a tempting target for villains of all stripes seeking to make their name away from the larger cities and their more powerful superheroes. The series centers on Focus, a married heroine who can become ethereal or strong as steel. eMMA is her best friend and fellow defender of the city.

Dickens is the writer and artist for the line of black-and-white comics which began in 2010 as minicomics. He graduated Brevard College in 1992 with a concentration in painting, where he also started a 26-year career in publications. His work has appeared in anthologies for Wide Awake Press, Ronin Studios, and PopImage.com. This year marks his fifth year as a member of the artists and small-press studios of HeroesCon.

The Heroes of Sinclair Volume 1 collection — spanning six issues, 144 pages and priced at $10 — goes into its second printing this year. eMMA 1 is 28 pages and retails for $2.99. Both are currently available from robotwonderboy.com and at various bookstores in Asheville. Heroes of Sinclair is also available from Comixology, a subsidiary of Amazon distributing digital copies of comics for computers and mobile devices.

“I’m thrilled to present a new story, one that considers how we define heroes these days,” Dickens said. “And, of course, with big action and some jokes. All the stuff that makes comics fun.”