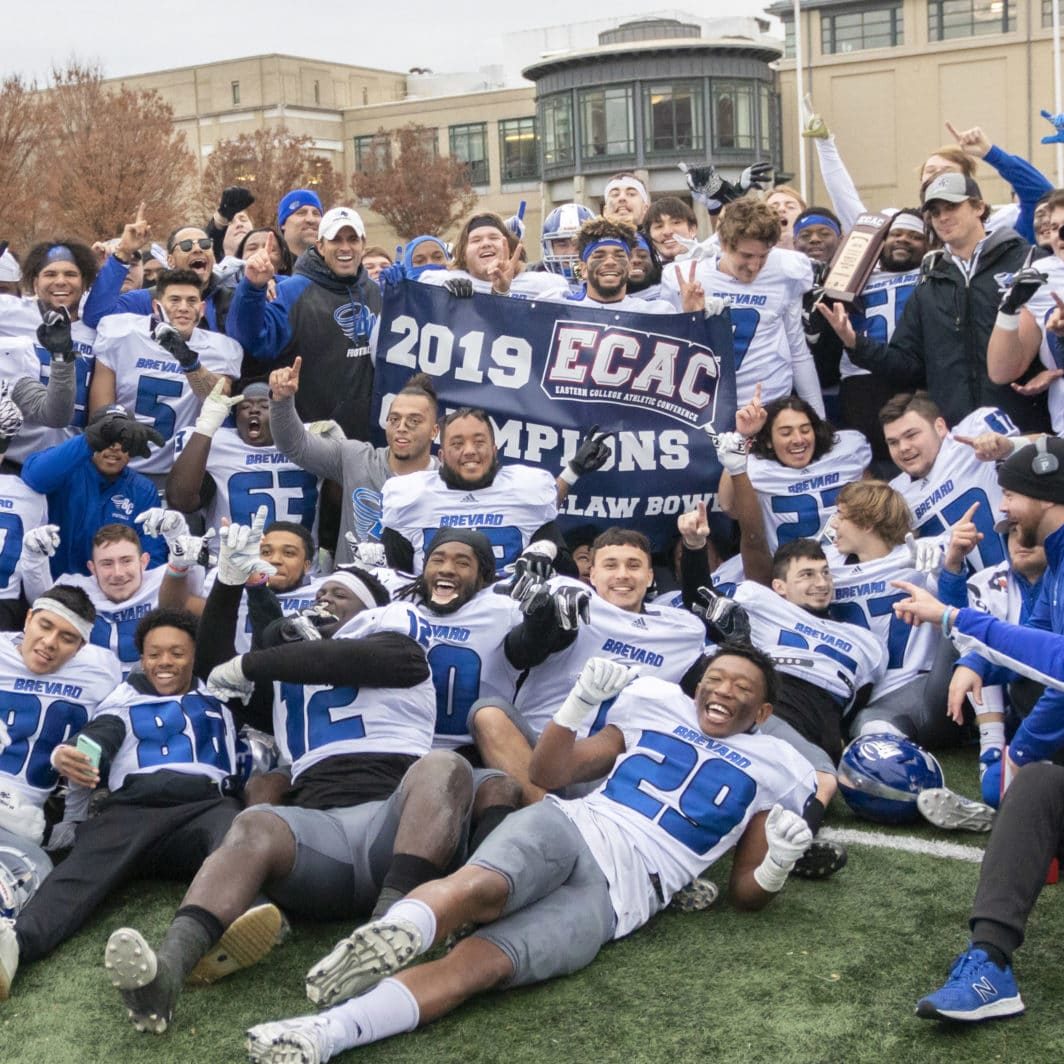 A historic, record-breaking season that will go down as the best season in Brevard College football’s history concluded on Saturday, November 23 when Brevard College (8-2) won the 2019 ECAC Scotty Whitelaw Bowl over host Carnegie Mellon (8-3), 42-28, at Gesling Stadium in Pittsburgh.

Brevard scored touchdowns on offense, defense, and special teams en route to the postseason victory – the first in BC football history – as the Tornados made their debut appearance in the postseason.

“I let our guys know before the game that we were playing a truly storied program – 548 wins for Carnegie Mellon to our grand total of 41,” stated Head Football Coach Bill Khayat following his team’s 42-28 victory in the Scotty Whitelaw Bowl. “However, that did not deter our players from playing our game. I told them not to do anything special, you want to do what got you here and that will provide for some excellent outcomes.”

“It was a joy to watch something that you’ve (the players) have dreamed of all season,” added Coach Khayat. “It’s what they’ve wanted the entire year – they had a plan and to see it come to fruition is such a joy for us coaches.”

The win gives the 2019 BC Football team eight victories this season, which sets a new program record for single-season victories.

The Tornados, led by third-year Coach Khayat, outscored the hosts 21-10 in the first half before a dominant third quarter that saw Brevard score 21 points that propelled the Tornados towards victory.

“Coach Easter was able to give Steffon a lot of different things to put into his arsenal this season,” commented Coach Khayat on Canady’s MVP performance. “Steffon is a great learner and wants to be great, so he took that education and applied it to the field, and after that, it’s all sheer determination and will to win, and that showed on the plays that he made today.”

Freshman defensive back Rook Tate recorded two interceptions – one of which being a pivotal 30-yard interception return touchdown – bringing the Gaffney, South Carolina native’s season total to four interceptions, which is tied for first on the team with fellow freshman Joc Pledger. Pledger and Tate’s four interceptions each are tied-for-second in Brevard single-season history, trailing Michael Gist’s five interceptions.

As a team, Brevard out-gained Carnegie Mellon, 390-193 in total offense, including a dominant 262-25 advantage in rushing yards. The Tornado defense tied the program single-game record for sacks (nine) and recorded the second-most tackles-for-loss (13) ever.

“Our secondary has always been one of our main strengths,” said Coach Khayat about his record-setting defensive backfield. “This year, we have added the element to stop the run, so now when teams get into a situation to throw the ball, things are going to go in our favor.”

Coach Khayat’s offense got off to the fast start that it had been looking for, as Brevard’s eight-play, 72-yard drive was capped off with Cole’s first of two touchdown passes on the afternoon, as the sophomore connected with Bennett for a seven-yard score. Damalos’ extra point gave BC the lead, 7-0, with 10:04 left in the first quarter.

“The spark came from starting off to a good start with a solid opening drive,” stated Coach Khayat on his offense’s hot start. “At times this year, we have struggled to get out of the gate offensively because the opponent had put out something that we hadn’t seen yet on film. This time, it didn’t matter what was brought out by Carnegie Mellon, our guys were just going to take it to them and sort things out as we went along. Our offense really made a statement on that first drive that we are here to play and it fired up the rest of the team.”

Brevard’s defense, led by Defensive Coordinator Luke Jaicks, forced a three-and-out on Carnegie Mellon’s first possession, forcing a punt. The Tartan defense followed suit to force a three-and-out of its own, giving CMU the ball inside Brevard territory at the 7:01 mark.

The Tartans capitalized on their good field position, as CMU’s Brandon Nguyen hit a 45-yard field goal to cut into Brevard’s first-quarter lead, 7-3, with 5:51 left to play in the game’s first period.

On the Tornados’ ensuing possession, Brevard was able to drive into CMU territory. However, a Tartan sack halted BC’s drive, forcing a punt attempt. On Carnegie Mellon’s first play of its next possession, BC standout freshman Tate picked off CMU quarterback Ben Armbreaster, returning the interception 30 yards for the touchdown score. It marked Tate’s second pick-six of the 2019 season and pushed Brevard’s lead to a 14-3 mark following the Damalos extra point.

Back-to-back sacks on CMU’s next possession forced a quick three-and-out, as the game’s MVP Canady was in on both sacks while Jerome Bass – who was named to D3Football.com’s “Team of the Week” last week – assisted on one of the two takedowns.

Carnegie Mellon found the end zone for the first time on the afternoon following a Brevard fumble. The Tartans put together a seven-play, 40-yard drive that ended with a Luke Bikulege touchdown run. The touchdown ended Brevard’s no-touchdown allowed streak that had reached an impressive 13 quarters before CMU’s second-quarter score, as the Tornados remained on top, 14-10.

After a Brevard punt on its next drive, Special Teams Coordinator Jeron Gouveia-Winslow’s unit dialed up another big play in what has been a season full of crucial moments. Scales Jr. broke through the line on CMU’s punt attempt, blocking the kick as Roman III scooped-and-scored to extend Brevard’s advantage, 21-10. That lead would hold true through the rest of the second quarter, as the Tornados held an 11-point advantage at intermission.

The Tartans opened up the second half of action with a promising drive that ended in a 30-yard field goal. Brevard’s defense was able to limit the damage, halting CMU’s drive in the red zone to force the field goal attempt that cut into BC’s lead, 21-13.

On the very first offensive play of the second half, Brevard’s Bennett took a toss and was off to the races, scampering for an 81-yard rushing touchdown that added onto the big day that Assistant Head Coach Eric Gallon’s stable of running backs had. Damalos’ point-after-try was true to push Brevard’s lead to 28-13.

Brevard’s Brandon Norris returned CMU’s next punt 19 yards to set up the Tornado offense inside CMU territory on its ensuing possession. After a Damon Rouse nine-yard run on 2nd-and-11, Cole connected with Parks near the first down marker. Parks turned on the jets, darting towards pay dirt to extend Brevard’s advantage to 35-13.

The Tartans scored off an 18-yard touchdown pass on their next drive, adding on a two-point conversion to cut Brevard’s advantage to 14 points at 35-21 with 5:11 remaining in the third quarter.

Brevard answered right back, scoring its third touchdown of the third quarter when freshman running back Mitchell Yoder took a 46-yard rush to the house. Yoder’s touchdown run marked the first of the Columbus, North Carolina native’s career, and Damalos’ sixth extra point of the afternoon pushed Brevard’s lead up to a 21-point advantage, 42-21.

After a CMU punt, Brevard was poised to extend its lead before the Tartans came up with a field goal block on a 39-yard field goal attempt just after the beginning of the fourth quarter. However, propelled by a Williams Jr. sack, Brevard’s defense forced yet another three-and-out on the Tartans.

Following a BC punt on the Tornados’ ensuing possession, Brevard’s Tate snagged the second of his two interceptions on the afternoon on Carnegie Mellon’s first play of its next drive, as Brevard had possession and a commanding 21-point lead with 9:30 remaining in the postseason contest.

Back-to-back Brevard drives were halted by turnovers, giving the Tartans extra possessions to attempt to climb back in the contest. BC’s defense forced a turnover-on-downs following Brevard’s first turnover of the game, but a late Tornado fumble turned into a CMU touchdown when O’Hea completed his second touchdown of the game, cutting Brevard’s lead to 42-28.

The Tornados used their potent ground game to chew time off the clock on their ensuing drive, milking the clock down enough to prevent CMU from scoring. Brevard’s 42-28 triumph over Carnegie Mellon clinched the program’s first postseason victory in its first-ever postseason bowl game.

With the victory, Brevard College concludes its historic 2019 campaign that saw several records and milestones shattered.

The 2019 Tornado team won eight games – the most by a Brevard College football team in the school’s history – in the 2019 season, trumping the 2009 squad’s previous program-record seven victories.  School records were also set this season with a .800 winning percentage and five league victories in USA South Conference play. Moreover, BC went 5-1 in road games this season, which also set a school record for road wins in the NCAA-era.

The Tornados finished second in a USA South Conference that they were predicted to finish sixth in by the league’s preseason coaches’ poll.

Brevard’s defense far-and-away led its conference throughout the regular season with a school-record 19 interceptions, 23 turnovers, 105 points allowed, and 11.7 points-per-game allowed. Moreover, Brevard allowed the third-fewest rushing yards-per-game and scored four touchdowns on defense, which was tied for the lead in the USA South.

In addition to these conference-leading numbers, BC’s 19 interceptions finished the regular season tied-for-third in all of NCAA DIII Football, trailing just Redlands (23) and Martin Luther (21) while being tied with four other schools.

“The players are the ones that make the plays on the field for the 60 minutes of football. The coaches are giving the directions and the blueprints to help the players succeed. However, we understand the role that everyone plays in our achieving these victories. Anyone involved in the Brevard community – those at Brevard College, those in the city of Brevard, and Transylvania County – we understand that everyone has a role and they are exceptional in that role, and that has allowed us to achieve great accomplishments this season.”

“As thrilled as we are to have been a part of the ECAC Scotty Whitelaw Bowl and achieve this victory, the plan for next year is to be competing in the first round of the NCAA DIII Playoffs,” (Brevard College will be fully-eligible for USA South Conference and NCAA postseason in the 2020-21 academic season as full members of NCAA DIII).