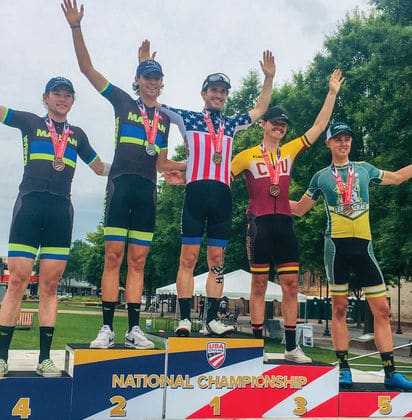 McGill finished in second place in both Saturday’s Road Race and Sunday’s Criterium to earn the individual omnium national championship in his final event as a collegiate cyclist.  McGill, a graduating senior from Fallston, Maryland, received a Bachelor’s degree in Biology last weekend from Brevard College.

McGill’s championship run began Saturday in the road race, originally scheduled for five laps and 75 miles on a hilly course at the Fort Gordon Army Base in Augusta.  Due to inclement weather in the area, the road race was limited to four laps with the riders notified of the revised final lap upon the start of lap four.

McGill positioned himself well down the homestretch as a sprint ensued toward the finish line amongst a large peloton of over 20 riders.  McGill came up just short of a victory, finishing second to Cade Bickmore of Marion University by milliseconds.

Brevard College freshmen Tim Coffey (26th place) and Dalton Collins (36th place) both secured solid finishes in the road race, while Clark did not finish after damaging a wheel due to another rider’s accident.

In Sunday’s Men’s Varsity Criterium, intermittent rain produced challenging conditions for the riders in downtown Augusta. Clark, Coffey and McGill all maintained position in the lead peloton throughout the 80-minute race setting up another sprint to the finish.  Coming out of the final turn and entering the homestretch, McGill once again displayed his sprint prowess, this time crossing the finish line side-by-side with eventual race winner James Hilyer of Fort Lewis College.  After review by the race officials, the photo finish went to Hilyer with McGill finishing second to secure the individual omnium championship.

Clark would finish in 16th place with Collins finishing 22nd in the Male Varsity Criterium as both riders joined McGill in the lead peloton throughout the race.

In Saturday’s Female Varsity Road Race, held in hot and humid conditions at Fort Gordon, Arensman maintained position in the lead pack throughout the five-lap, 60-mile event.  The junior from Valdese, N.C., finished ninth in the event, three seconds behind race winner Olivia Ray of SCAD-Savannah.

Arensman went back to work on Sunday morning with the Women’s Varsity Criterium.  After a solid start with Arensman on the inside lane of the front row, a multi-rider accident ensued on the final turn of the first lap.  Caught up in the wreck, Arensman was able to recover going to a backup bicycle while the field was held for a re-start.

Following the re-start, Arensman was strong throughout the criterium with position in the front pack for every lap.  The final lap however saw another multi-rider accident on the final turn with Arensman once again impacted.  Despite the adversity, Arensman was able to quickly recover and cross the finish line in 14th place.

On Friday, Collins represented Brevard in the Male Varsity Individual Time Trials where he finished eighth in his collegiate national championships debut.

The Brevard College Cycling team, under the guidance of Head Coach Brad Perley and Assistant Coach Cypress Gorry, will return to action in the Fall with the Mountain Bike season.  The 2019 USA Cycling Collegiate Mountain Bike National Championships are scheduled for October 18-20 in Durango, Colorado.