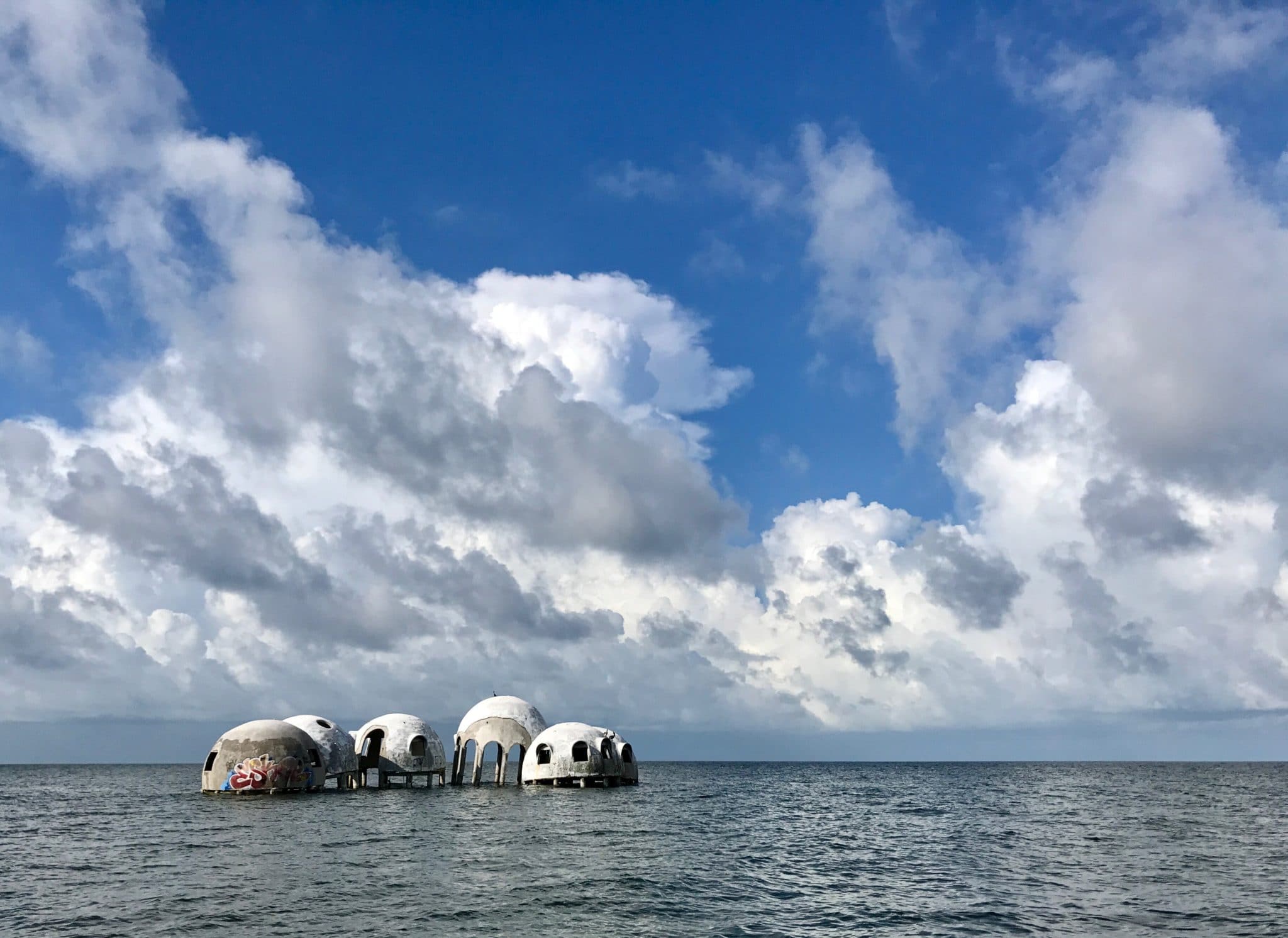 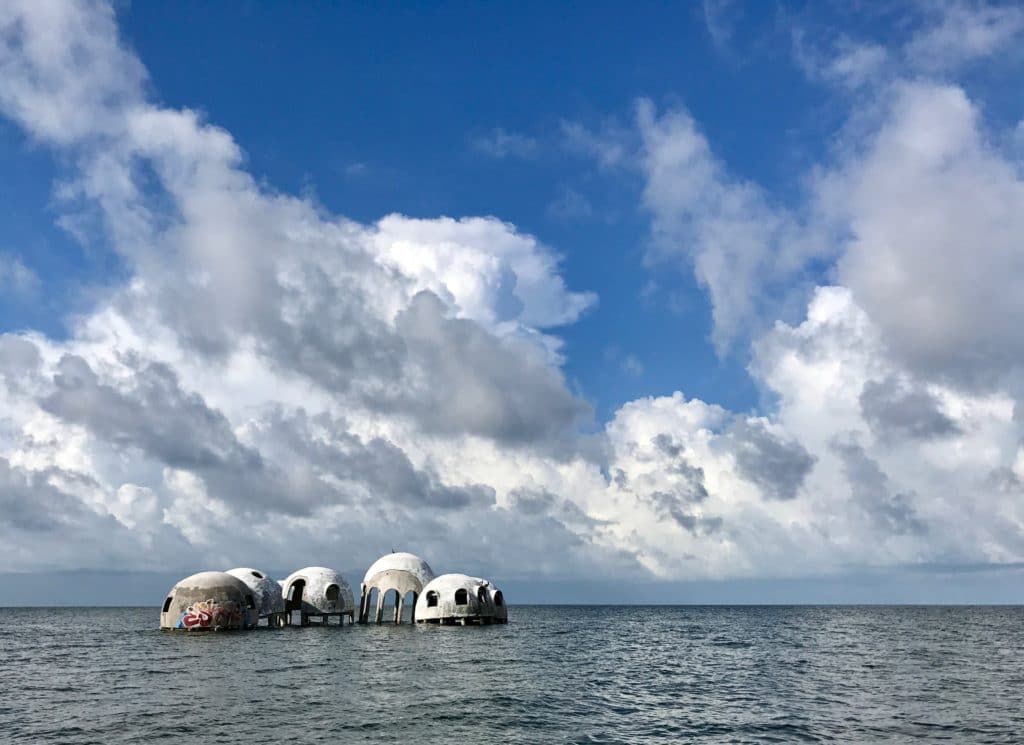 Property on Cape Romano in S.W. Florida that has been claimed by sea level rise. Photo by Kaylee Smith

Environmental Studies senior Kaylee Smith was steadily working on her senior project for BC when Hurricane Irma hit Florida and caused her research to be quite literally washed away. Her project, focused on mangroves, was scrapped for a second time during the semester.

Smith’s project now is studying the impacts of sea level rise on the mangrove forests in Southwest Fl. “I researched and found what the projected sea level rise will be for that area by ‘x’ number of years,” Smith said.

Her research found by 2020 the level would increase by one foot. “By 2060 it’ll be two feet, and 2100 it’ll be three,” Smith said, “So I used a computer mapping program, GIS [Geographic Information System], and downloaded data. It was a different data layer per sea level rise, and I layered those data files to see the change on a map,” Smith said.

The layered map revealed how much land will be lost in acreage as sea levels continue to rise within the clipped region Smith selected. She chose her course of study based on a research internship she had this past summer at the Rookery Bay National Estuarine Research Reserve in Naples, Fl.

Smith said her research showed that in 85 years, almost 500,000 acres will be lost just in the one region she studied due to climate change.  “That’s not to say 500,000 acres of mangrove forests will be lost,” Smith said, “Because they can withstand some submersion but there’s no set number of height of submersion a mangrove can take before it drowns. It depends on their environment and adaptations.”

Regardless of ability to withstand taking on some water, full submersion of mangrove forests for extended periods of time will result in the loss of natural land protectants. Smith is conducting her research to be utilized by the Rookery Bay Research Reserve, where the site can know more about the effects coming in the near future due to climate change.

“They’ll be able to use this to back them up in research they are currently conducting,” Smith said. “I became interested in this when I was there this summer [at the reserve], helping install the beginnings of the sentinel site program.”

The sentinel site program is being put on in all 28 research reserves across the nation to measure the different impacts of climate change. “Rookery Bay is one of those research reserves and it’ll have a sea level gauge, salinity water tester, a rain gauge, just to measure all the impacts of climate change in that area,” Smith said, “And then that data can be compared across the board from the different sites.”

Smith’s work with organizing the sentinel site arrangement allowed her to discover a passion for working with people and less with research. “This summer I learned a lot about what I don’t want to do,” Smith said. “But what I was doing was valuable work.”

The sentinel site program allows for an initiative where communication of research and monitoring between scientists and research managers is effective and educating the public about local and global impacts is a priority.

Smith’s senior project is almost completed for BC, all she has left is a presentation and a cumulative paper. “I don’t really know how much farther my study could go,” Smith said, “My original plans both didn’t work out.”

Smith originally had planned to measure health in mangrove forests by studying the DBH (Diameter at Breast Height) of different mangrove trees in a certain section to assess growth while she was in Naples this summer. “While I was down there, though, I ended up just not doing that project,” Smith said, “So when I got back to school in the fall, I had to redesign a project I could do from here while communicating with the reserve.”

This second project was a manual the research center could use in the meeting where the decision for the location for the next sentinel site would be made. “That meeting was supposed to happen in September,” Smith said, “I was going to create a map that would show sea level rise in regard for the potential sentinel site locations, and then Hurricane Irma happened and it wiped out everything.”

Rookery Bay was “off the radar,” according to Smith, and her opportunity for research and communication with the site in Fl. was no longer an option. “I couldn’t get any information from then so I had to start over again, and at that point, I only had about three weeks to get together a concept for my senior project,” Smith said.

Smith still hasn’t had a lot of contact with Rookery Bay, so she is researching and creating a plan based on what she believes will be the most useful and applicable for the research center.

“It’s kind of funny because my original question for my project was ‘What are the impacts of sea level rise on mangrove forests?’ which is actually what my title is now,” Smith said. “Everyone, including Dr. Cabin, said it was too vague of a question and it’s a 20-year study, which it is, but I’m doing it by means of making map projections.”

Smith has been able to incorporate her hardships with climate change and natural disasters in her research. “In my project, I’m talking about the importance of mangrove forests, mainly how important they are for climate change resiliency,” Smith said, “They stabilize the shorelines and help protect us from intense storms and they maintain sea level rise.”

According to Smith, the surges experienced during Hurricane Irma along the coastline would have been much higher without the prominent work from the mangrove forests. Smith will conclude her research on this topic when the semester comes to a close.

“Unless they reschedule the meeting that was supposed to happen in September, where everyone will fly in and discuss the new sentinel sites, I’m done with this research,” Smith said. “The Sentinel site project has currently been put on hold because at the moment they’re cleaning things like mobile homes out of their bay from the hurricane. But if there’s a meeting in spring, I’ll pick the research back up.”

Eventually, Smith would like to work in the field of marine conservation. “I used to think I just wanted to get my master dive certification and travel and work on different conservation projects and eventually go to grad school,” Smith said, “Now I’ve thought a little more about it and I think I want to go to design school for art and combine what I know about the environment and be able to get into environmental design.”

Smith said the idea of design school is a new one for her and she is unsure what her future will entail. “Mainly I just want to get into environmental conservation. Climate change is real,” Smith said, “I’ll eventually go to grad school and study something that will make a difference.”