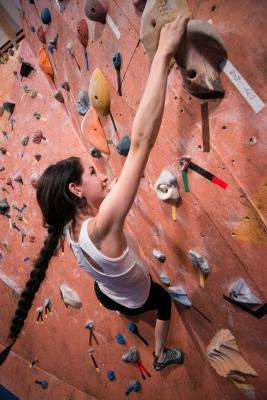 Brevard College Athletics is excited to announce the addition of competition climbing to its list of competitive sports, after the team’s continued success as a club sport.

“Rock climbing will be an exciting addition to our athletic programs here at Brevard,” said Vice President for Strategic Planning and Athletics Juan Mascaro. “The team is already well-established and extremely successful at the club level, similar to cycling 10 years ago, and we know that they can achieve great things as a part of our athletic department. With the College’s commitment to an experiential education mission, bringing climbing to varsity-sport status will enhance the overall experience of dozens of student-athletes who work so hard to be successful.”

Brevard competes in the Appalachian Division of USA Climbing, which consists of schools from North Carolina, Tennessee, and Kentucky. Brevard is one of the smallest schools, but the team has proven to be a top contender in every competition. The team has attended USA Climbing Collegiate Climbing Series Regionals in Chattanooga, Tennessee, since 2012. In both 2014 and 2015, the team took home a second place finish and earned berths in the USA Climbing Collegiate National championship 2012-2014.

Last February, Brevard College Climbing traveled to The Crag indoor climbing gym in Franklin, Tennessee, to compete in the Nashville Collegiate Climbing Regional. The team finished second overall, earning a berth to the National Championship in San Diego, California. The second-place finish put the team on the map as a force to be reckoned with in USA Climbing.

Collegiate competition climbing follows the academic calendar and allows competitors to compete in bouldering, sport, and speed-climbing events. Bouldering consists of short but challenging routes that do not involve the use of equipment. Climbers are required to use balance, technique, strength and strategy to help them through the climb. Sport climbing has permanent anchors in the rock that are used for safety. Sport relies on the strength and endurance of the climber. In Speed Climbing, the climber scales a 10-meter wall as fast as possible.

Travis Gray, the team’s longtime sponsor, will begin as head coach on Monday, Nov. 21. Gray said he is extremely grateful that climbing is now being recognized as a competitive sport and credits his students, the faculty and staff at Brevard College, and the Brevard community.

“Wow! There is simply not one adjective in this world that can sum up how excited the team and myself are to be a part of this monumental piece of history for Brevard College,” Gray said. “The team wants to sincerely thank President David Joyce and his wife Lynne, alongside the Brevard College Executive Leadership Team, who have never seized to give up on finding any way to make this team a reality for Brevard College. We also want to thank our fantastic Board of Trustee members for their trust and faith in us, and for their approval of the first-ever Brevard College Climbing team.”

Due to Brevard’s ideal location near Pisgah National Forest, students have access to some of the best areas of climbing, such as Looking Glass Rock and Cedar Rock. Climbers can also tune up their technical skills at the Brevard Rock Gym located a few blocks from Brevard’s campus, and owned by faculty member Cameron Austin.

The transition of the climbing team from club to official competitive sport is the culmination of hard work from members like team president Audrey Ashburner. She said the process taught her the importance of leadership and organizational skills.

“I have been working towards turning the climbing club into a competitive sports team for the past two years of my college career, and it has been the most rewarding experience of my life,” she said. “I am so proud of what the club has accomplished and overjoyed with all of the support I received from Brevard College and the Brevard community in order to make this possible.”

Gray credits his student-athletes for the success of the team, as each of the 30-plus members have put in countless hours training, fundraising, and competing while balancing the demands of classes and schoolwork.

“This team embodies the very essence of perseverance and has transcended its adversity into successes at collegiate competitions,” Gray said. “This magnificent group of students are true champions on this campus, and the potential for each of them is endless. There is truly no height that each of them cannot reach on and off the wall. I am truly honored to help mentor them to many more accomplishments as their coach.”