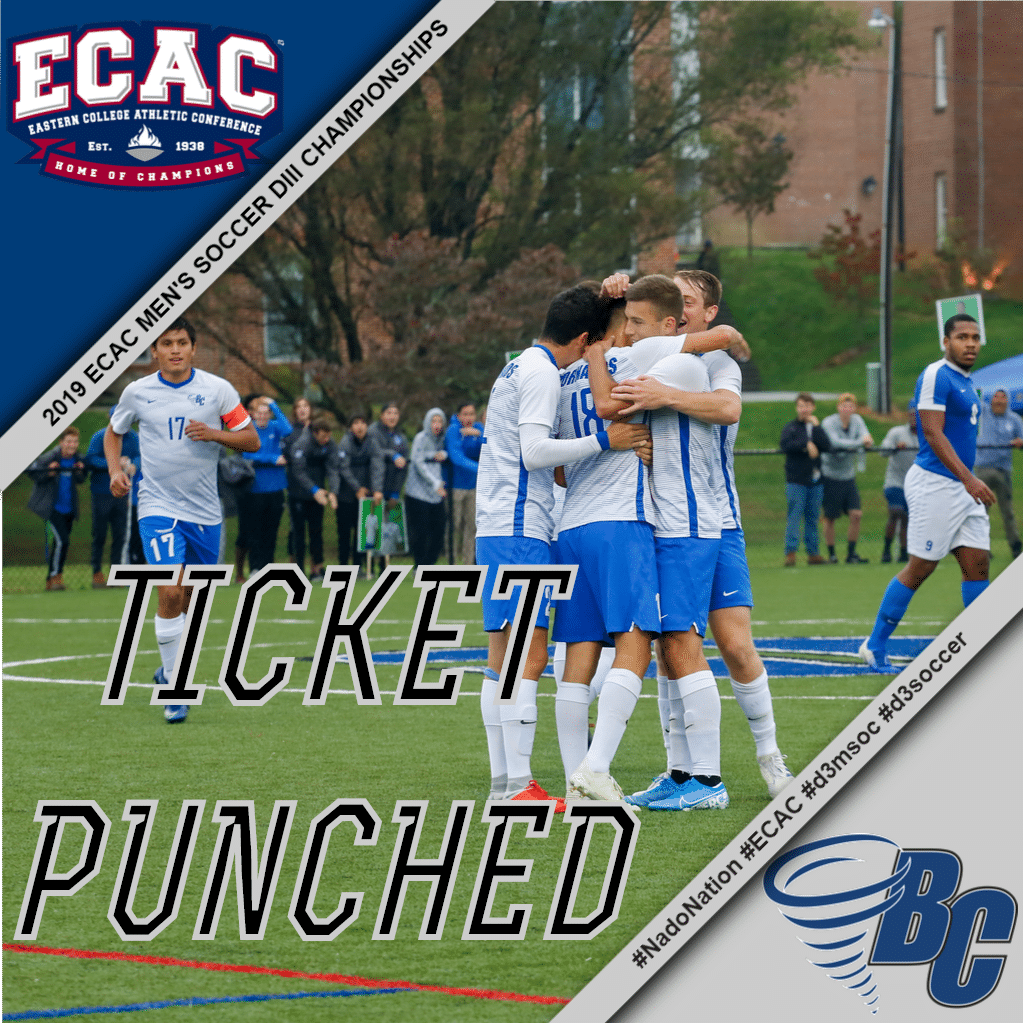 Following a successful regular season that culminated with a second-place finish in the USA South West Division and a 7-6-3 overall record, the Brevard College men’s soccer team has been selected for postseason play with a berth into the 2019 ECAC DIII Men’s Soccer Championships.

Brevard has earned the number-two seed in Pod 2, where the Tornados were selected to take on No. 3 seed and host Widener University on Saturday, November 16 at 2 p.m. at Leslie C. Quick Jr. Stadium, located in Chester, Pennsylvania. If victorious, the Tornados will take on the winner of No. 1 McDaniel College vs. No. 4 NJCU in the second round, also hosted by Widener, on Sunday, November 17 at 12 p.m.

The winners of pods 1-4 advance to the semifinals of the 2019 ECAC DIII Men’s Soccer Championships at a site to-be-determined on Saturday, November 23 at 11 a.m. and 2 p.m. The championship match will follow suit on Sunday, November 24 at 12 p.m.

The selection marks BC’s first postseason appearance since the Tornados competed in the SAC Tournament in 2016, where Brevard knocked off nationally-ranked Wingate University, 1-0, in that conference tournament’s quarterfinals.

Brevard’s 2019 men’s soccer team has had one of the program’s most successful years in the NCAA-era under BC’s first-year Head Coach Helio “L” D’Anna. Coach L has led the Tornados to their first regular-season winning record (7-6-3) in the program’s 11-year stretch against NCAA competition.

Brevard’s seven regular-season wins tie the 2016 and 2017 Tornados for the most single-season victories in Brevard’s NCAA-era. All of the Tornados’ victories this season have come in USA South play, setting a new single-season high for most conference wins in program history.

Brevard College Men’s Soccer team sends seven senior student-athletes to the ECAC Championships.  Matheus Masukawa, the senior from São Paulo, Brazil has set new program NCAA-era records tallying 12 goals and 30 points in his three-year playing career at Brevard, both of which are career records. His seven goals scored in 2019 are the most single-season goals in Brevard’s NCAA-era history.

Senior goalkeeper Patrick Hall, who was named to the USA South Men’s Soccer All-Conference Second Team, has had one of the most successful careers for Brevard between the goalposts. Hall’s seven wins this season are tied for the most single-season wins by a goalkeeper in Brevard’s NCAA-era history. For his career, Hall has racked up the second-most saves (222) and has the best save percentage (.733) in BC’s NCAA-era. In addition to Hall’s All-Conference nod, the Pikeville, North Carolina native also received USA South Defensive Player of the Week honors this year.

Freshman Lucas Campos and Joao Monteiro have burst onto the scene for Coach L’s squad as key contributors this season, earning conference accolades along the way. Monteiro was selected to the All-Conference Third Team and All-Sportsmanship Team, while Campos earned USA South Rookie of the Week honors this season.